Flashbacks and Flowers: An Interview With Rufus Mufasa

Rufus Mufasa is a poet, rapper, pioneering participatory practitioner, and mother. Her work has seen her become a Barbican Fellow, a Hay Writer at Work, and a mentor of Finnish beat poets.

I recently caught up with People Speak Up’s resident Poet On Prescription to discuss her new book, Flashbacks and Flowers. We discussed her artistry, lockdown, and getting her book out into the world. 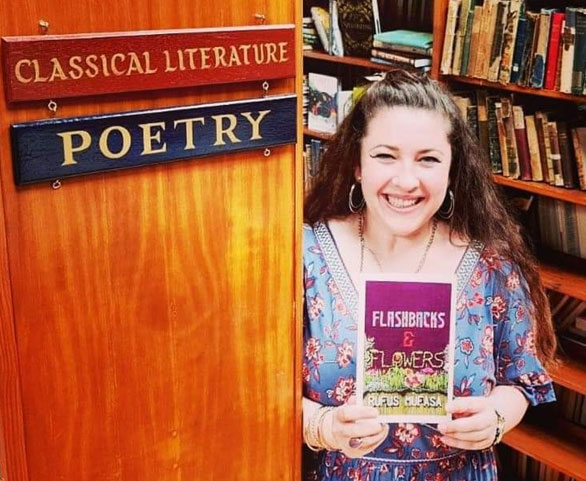 There are a lot of powerful stories in the book, what has been the reaction from people you know?

I think it was quite hard because a lot of people know me and my artistry and know a lot of my story I think that people found it quite difficult. Eleanor (Shaw, PSU Director) read it and she’s no stranger to my work. But I don’t even think she was expecting the book. I remember my lecturer from university who has known me since forever noticed something about me in my last year in uni, especially with the languages thing, and she saw something in me. So when the book came out, I sent her a copy, when we met up after she was holding it like a baby and rocking back and forth. I wanted to get on and do whatever we were doing because I’d probably kept her waiting for ten minutes and she said:‘No, we need to talk about this. Are you okay?’ And I was like “yeah yeah, I’m okay”. She’d obviously read the book and thought “this is huge”, and I’m like “I don’t live there no more. It’s gone.” But then I think I was quite naive about what people would fetch to that.

I did think everyone knew. I don’t even feel like this is ‘my shit’, I feel like this is a problem for all women. Because I’m not an isolated incident. But then also I had therapy last year, and they said that by thinking of it like that, you’re actually minimising your own trauma. And then I realised that I had this very matter-of-fact, news-reporter-style way of relaying very traumatic events. My therapist explained to me that that’s a tactic I use, and from that revelation, I realised that I’ve kind of done that in the book.

There’s almost no sentimentality especially with the trauma, I was maybe sentimental about my elders who were good to me.

The book could have been in out last year, in 2020, but I don’t think I was emotionally ready and there was a lot of stuff going on in the background. I think the book came out when the book was meant to come out. I think for me, there’s chronological order. Each piece is separate, but together it all works like a story and I’m really proud of this thing that I did.

I’ve had a tough time with the divide between the page and the stage and navigating my way around that. I was like “I’m gonna show this page poetry who-ha that my pen game’s strong” but also without comprising who I am and that what I’m bringing to contemporary language and literature is valid.

I definitely found that my comfort zone with the sequencing. If it’s too big for one thing it can be broken down. So that kept me on point.

What I found hard was that I suppose I did a lot of inner healing and inner child work around five-year-old me, or that sort of era. Then in lockdown 2020, the eleven-year-old me was there screaming for attention and I really didn’t want to go there, but I had to. At eleven your bang on the cusp between primary and secondary, between girlhood and womanhood, between being vulnerable and being really fucking vulnerable, and so I really had to process that.

I found the ethics difficult. I talk about Weasel in one of the poems...talking about his brother’s suicide- and I wondered can I go there? But I had a conversation about it. And another one was my Auntie Shirley, and I remember digging with my mother and my mother saying “I can’t answer your questions, you’re stressing me out.” So I phoned my sister instead. Sometimes I think it’s about being brave with people and being upfront.

So, there’s something I wrote about the summer of ‘94 and eleven years old me when I talk about the cat woman. I reached out to the cat woman’s daughter and said I really want to write about your mother. But I never heard anything back. So I either don’t do it, or I just do it. I did it. I think you’ve got to just roll with those things. I think it’s a great poem. There’s more to the story...maybe that’s why she didn’t reply.  But there’s no badness about her.

It’s funny how you can think about the people from your past and you wonder what do they think about you, and did you impact them in any way? 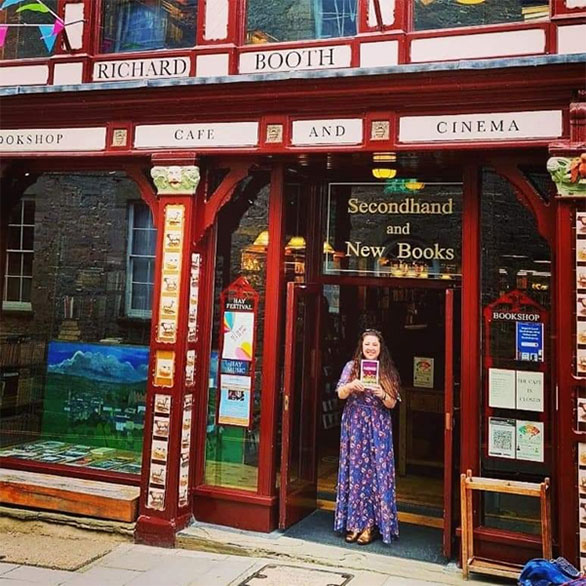 You’ve got a very distinctive voice. Who or what inspires that voice and where and when did you find it?

Without sounding like I’ve got a multiple personality disorder, I can actually see inside my brain and if I’ve got a little Filofax there. It’s crazy. Is this a normal thing? Can you visualise inside your brain?

When I was at Beyond the Border Storytelling Festival and at Landed Festival  I was on stage between things I had to do this banter to keep people happy. There was stuff coming out. Like I was almost saying what was on my mind and then it would come out in a different voice. And everyone would think it’s hysterical. But I’d think it was more hysterical because I’m not actually trying to be funny, I’m just saying what I’m thinking. But I’m not sure if you’re actually supposed to say those things out loud. Like there’s sometimes no filter between what people think and say but I’ve got to capacity to do that so it all just comes flowing out. Or if I’m saying something difficult or being overly honest, I find it a little bit easier to do it if I just put on a voice.

Then my spoken voice sounds totally different to my performing voice.

I love Mary J Blige and love Missy Elliot, I love Jill Scott. There’s a wall in my room and it’s just full of women. Amy Winehouse - but how she talks and how she sings was totally different. Something happens when you sing. It’s like prayer.

When I saw you freestyling in Beyond the Border, it was almost like you were speaking in tongues.

How did the book come to be?

So, an earlier version of the book was highly commended on the Geoff Stevens Memorial Prize. So I was on that publisher’s radar, and there were a couple of poems that they’d printed in anthologies. Then I saw this callout one day that said we’re taking on new collections.  I’d actually had surgery and I remember signing out of hospital early because “I’ve got to get home, this is hell” and they were like, “we don’t want you to go you’ve had a nastier op that we were expecting” and I said, “look, I’ve got deadlines, I’ve got to go home”. I went home, and I just stayed up to get it in by midnight. And I’m so glad I did because it would change my whole game.

So they got in touch in October 2019, or the beginning of November 2019 and they said they said that one of my poems had been accepted to the ‘Dear Dylan’ anthology. I said thanks and that I was going through a really shit time. They got back and said that I’d be even happier to know that your book is getting published. It was like in the movies when people dramatically drop to the floor - I did that. It was like a real moment because I’d had a bit of a situation where I’d lost a lot of my other work and it had gone missing and I felt like the gods had thrown me a lifeline and sort of said “leave all this go and just focus on the book” so that’s how it came to be.

But something happened in the process and I’m a firm believer in trusting in the process. So something happened and it became something else and I remember emailing the editors and the publishers saying “I’m working on it” and then in my head, I thought- I think they need to see it at this stage. So I sent it off to them and said I haven’t finished but I think you need to see it. And they were like “Rufus, You’ve broken all the rules” and I was like “there’s rules? I didn’t know about these rules” and I’m really glad I didn’t know about the rules or the book wouldn’t have become the book (it became). I think they quite quickly got it and we were all fine. Then I told them I wanted illustrations and then they saw the illustrations. They’ve been amazing really, they had to trust in my vision and they did. I feel better that they’re in my life.

They would say “Rufus, this is in the final proofing, is this ready to come out?” and I’d be like yes and then I’d send them four pages of edits. Then they’d say “you’ve just got to let this go.” So for me digging my heels in to then being like “you’ve got to do this now to try and get it out for Hay Literature Festival”. And I did it. They pulled it off- which was amazing. 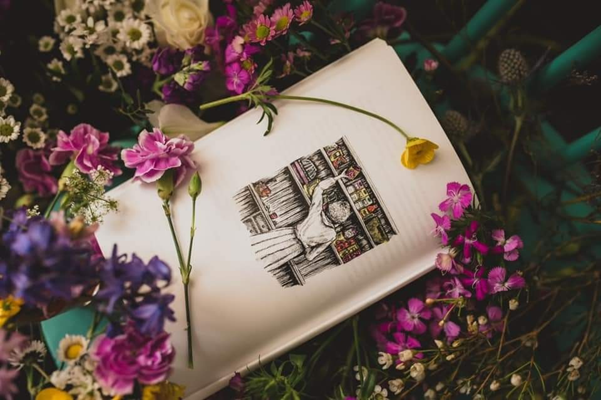 What advice would you give to any budding poets?

Network. Find support groups. Just go find a group of writers and critique each other’s work over coffee. I’ve got an amazing friend called Anne Philips, she’s been such a diamond to me. We regularly send each other work and we look forward to receiving and reading and saying things about it.

What’s next for you?

The album Trigger Warnings will be out before the end of the year. And then I’ve got a play that I’m writing for Theatr Genedlaethol Cymru, I’m also working with Experimentica in Chapter and I’m working on an indigenous languages project in Senghenydd and I’m poet on prescription for People Speak Up, my family, bringing it west.

Rufus is Poet on Prescription for People Speak Up. Her new book, Flashbacks and Flowers is available to buy from Rufusmufas.com for £14 including some “Rufus love” 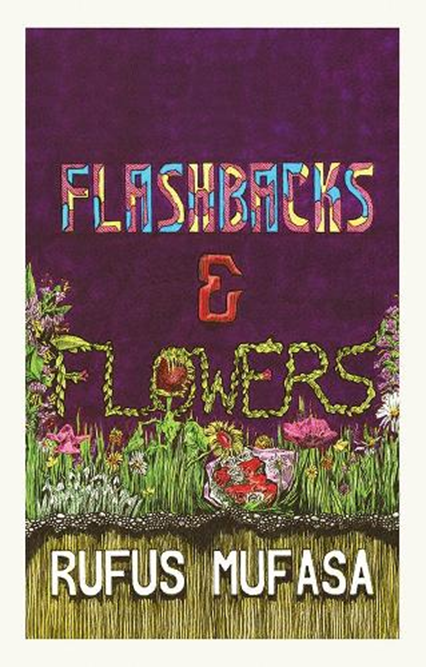