The Gods Are All Here - An Interview With Phil Okwedy

Phil Okwedy has a long-standing relationship working with People Speak Up both as a storyteller and a facilitator. He’s about to embark on a tour of his one-person performance storytelling piece ‘The Gods Are All Here’, in which he pieces together the story of his parent’s relationship through a series of letters sent from his father in Nigeria to his mother in Wales. 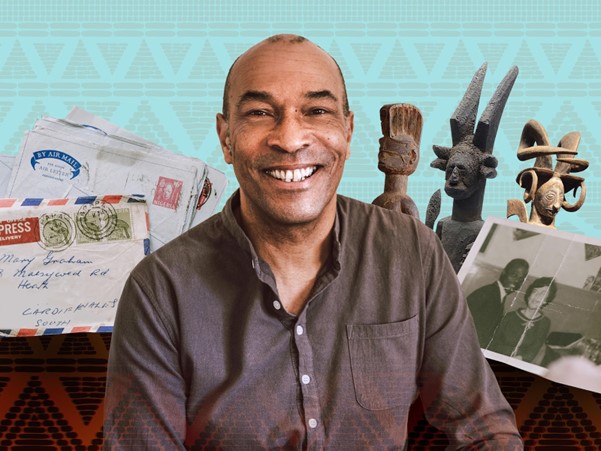 The Gods Are All Here includes stories from Phil’s time growing up as a foster child in South Wales and explores themes of racism, freedom, and family relationships while touching on myth and folktales.

I spoke with both Phil and producer, Naomi Wilds, of Adverse Camber about the inspiration and development of the upcoming production of The Gods Are All Here.

PHIL - The Gods Are All Here, which charts the course of my parent's fractured relationship, was developed during lockdown with funding from an Arts Council of Wales sustainability grant. Working with storyteller Michael Harvey, as director/dramaturg, the story was initially conceived as a piece for online performance.

Phil - I did not grow up with either of my parents but with a long term foster mother. However, I knew my birth mother and when she died I found a series of letters written by my father to my mother. It is these letters that eventually provided the inspiration for the show.

How much has the story evolved through performance?

PHIL  -  A major element of the creation of the show was performing it online to an invited audience and I’m very grateful for the feedback we received between various iterations because it had a massive impact on shaping the piece we ended up with. Then we came out of lockdown and physically present performance was possible again. As a result, I am now working with the production company Adverse Camber and Michael Harvey in preparation for touring the show throughout Wales. Being back together in a physical space with the intention of performing to a live audience has also had a profound effect on the evolution of the piece and we can’t wait to share it.

Has the reaction of previous audiences changed your interpretation of your parents' relationship?

PHIL - Yes, the feedback, comments, observations and questions that audience members ask constantly push me to define and reinterpret my understanding of them and their relationship.

PHIL - That is a very good question and not at all easy to answer but if I’ve learnt anything it’s probably that I could always view the world with a bit more compassion. I started out believing I knew how I felt about my parents. I had very fixed ideas. But through this process, I’ve come to see just how essential their flaws were to their humanity.

What was involved in the production process of ‘The Gods Are All Here’?

NAOMI - Underneath our role as a producer is a huge belief in the quality and appeal of the show Phil has made, which tells a very human and family story which we can all relate to, whatever the circumstances of our own relationships with our parents, and how that influences our sense of identity and our personal stories. This links in beautifully with the mythic stories of the ‘Gods’ that he tells, together with historical stories which throw a different light onto the central story and vice versa. It's a really skilfully woven piece with a lot of heart and joy within it, and we know everyone who comes to see it is going to enjoy it and feel moved by it – hence our enthusiasm to work with Phil on how we can share it with as many people as possible!

So, our first step in the production process was talking to Phil about what he wanted to achieve artistically with the show, then combining this with Adverse Camber’s knowledge of venue networks, audiences for storytelling in Wales, and the potential for widening engagement making use of Phil’s creative facilitation skills either ahead of or following touring performances.  These ideas combined with chats about what kind of production process would help the performance transition from Zoom, where it originated, into theatre and community spaces.

We talked about how to support the piece on tour, and to help strengthen storytelling in Wales, recruiting an Associate Producer based in Wales to work on the project with us, Jasmine Okai.  All these ideas were massively supported by the brilliant team at Theatrau Sir Gâr who provided access to their fabulous studio and main theatre at Ffwrnes to work in for 3 weeks over April and May to bring these ideas to life.  And finally, none of it would be possible without the support of the Arts Council Wales who granted the project the funding to enable these plans to be realised.

How did Adverse Camber help in the development of the production?

NAOMI - Our role is basically to hold the reins of the creative process and help make sure we’re all achieving the goals we set out to achieve, giving the creative team space to explore their artistic aspirations, keeping our eyes on all the other stakeholders who are involved, including the audiences, programmers, funders and so on.

We helped in recruiting the creative team, with Phil involved in all the decision making. Michael Harvey, having worked with Phil as a dramaturg in the early stages of development was a natural choice to take on the Director role.  We’ve linked up with a fabulous designer, Molara Adesigbin who is bringing her creative eye to the look of the piece in the performance space, and also a wonderful Lighting Designer Elanor Higgins who has created a look and feel through lighting to help complement how Phil weaves through the different stories in the performance, plus Sound Hire Wales’ technician Gethin Stacey and Simon Davies from Ffwrnes to make everything work practically in the performance space.

The rehearsal process has been really creative, exploring the stories, Phil’s performance and the look and feel of the performance space to make sure it’s supporting the ideas within the stories. We’re also heavily involved in creating a marketing and promotion campaign which showcases the appeal of the show to a range of audiences.  We’ll be filming a trailer next week, in Cardiff and Llanelli, our Marketing Manager Jenny Babenko has been commissioning photographs, designing posters that you can see all around Llanelli and social media graphics, and working with PR specialist Suzanne Carter to get the word out to audiences through venues. Jenny’s also been contacting venues, telling them about the show and booking in the tour dates for the rest of the year.

Adverse Camber is the producer of the tour, which ultimately means we support the piece throughout the creative process and go on to manage the tour, which we know is going to be a great adventure for Phil and all the audiences who come to see it and are going to have a wonderful night discovering this brilliant set of stories, we can’t wait for the first show!

The Gods Are All Here can be seen at Ffwrnes Llanelli on Thursday 26th May at 8pm, at Blackwood Miner’s Institute on Friday 10th of June at 7:30pm, and The Riverfront in Newport on Saturday 11th June at 7pm.